LtlAcorn.com-Best Hunting Tips For You When Acorns are Everywhere

Inevitably, every whitetail hunter who spends enough time afield will face a bumper acorn crop. This is good because deer will gorge on them. It’s bad because deer don’t move nearly as far to feed as they do during a measly or mediocre crop. During an abundant year, acorns will likely even drop in or very close to deer bedding areas. Talk about breakfast in bed!

I recently faced this dilemma during an out-of-state bowhunt. Not only were acorns abundant, but chestnuts and soybeans were plentiful, too. It was a whitetail smorgasbord! Let’s review a few things I learned during the hunt.

When food is everywhere, deer sign won’t be readily noticeable like it is when deer are using one or two main feeding areas. During the hunt, I phoned my friend, Bernie, to discuss the dilemma of abundant acorns, soybeans and chestnuts. He advised that I focus solely on terrain features near the oaks. He assured that approach would yield far better results than sitting right over the acorns. Earlier that day, I’d hung a stand in what appeared to be a funnel deer were using to travel between a prairie and an acorn-infested creek bottom. I wasn’t ultra-confident in it since sign was minimal, but still planned to hunt it when the wind was right. I felt better about the location after talking with my friend. And the next morning, the stand produced a 150-inch buck that fell victim to the funnel as he trailed a hot doe. 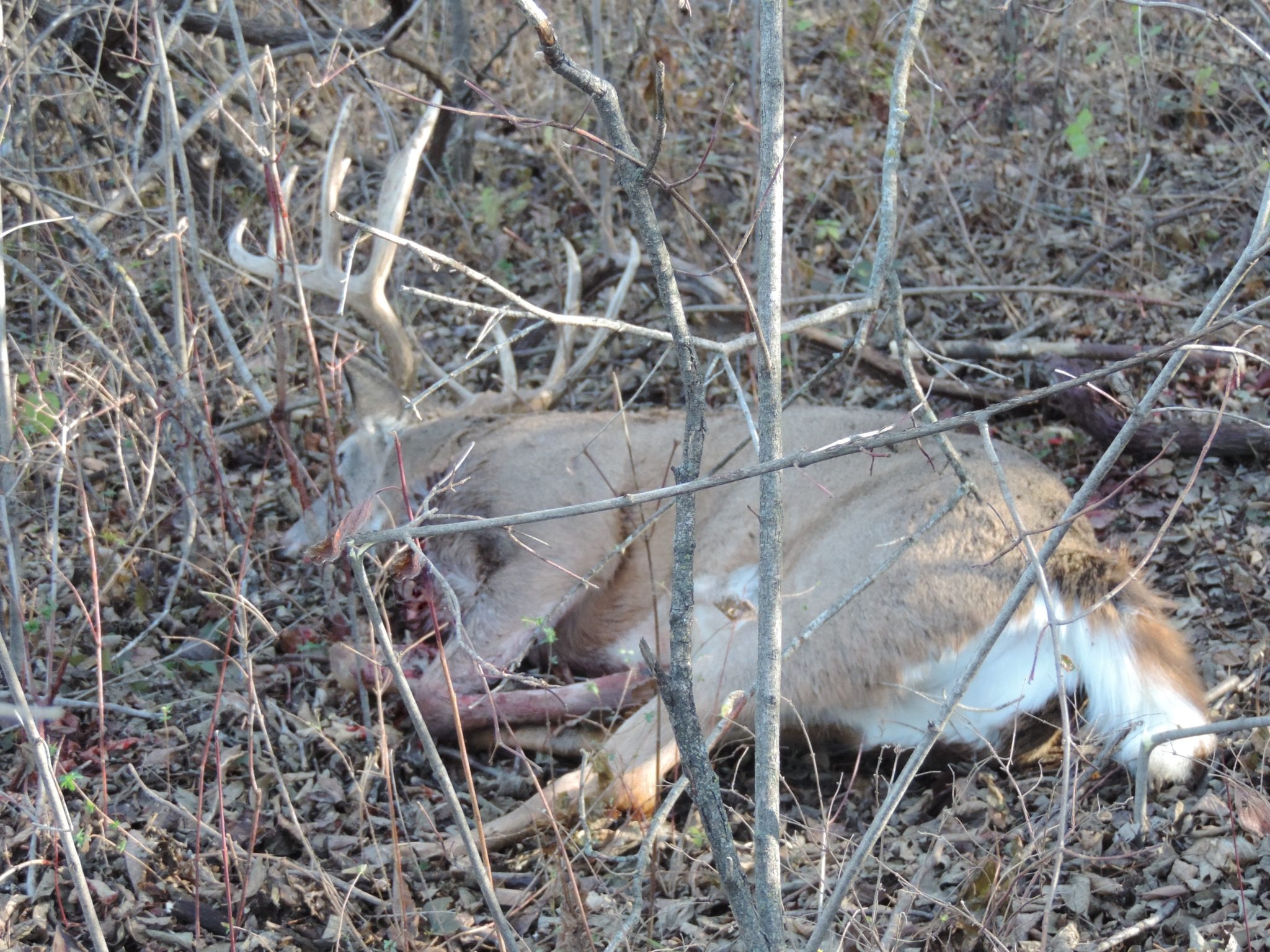 Author Darron McDougal shot this dandy buck when he buckled down in a funnel area near an acorn-filled river bottom. A hot doe led the monarch right into bow range.

The Rut Will Get Deer Moving

Again, deer move very little early in the fall during a bumper acorn crop. You could sit over an acorn goldmine and not see a single deer, let alone a mature buck. It can be very frustrating. But don’t fret, because the rut will change that. When seeking and chasing begins, buckle down in a draw, funnel, pinch-point or bottleneck with acorns nearby. Deer that moved very little during daylight hours earlier in the fall will begin cruising through. Be there to capitalize.

This is a view of the funnel where the author nailed his big buck. The creek bottom below was filled with acorns and chestnuts, and what sparked the daylight encounter was the rut’s arrival and an ideal stand location with terrain features that funnel deer.

Another time when you can score over acorns is during the late season when temperatures plummet and snow falls. Deer have been munching on these nuts for almost three months, and what’s left over will continue drawing deer, especially if other food sources – such as corn or soybeans – are scarce. Scout for where deer are actively feeding. The telltale signs will be rototilled snow where deer have been pawing and digging through the snow for acorns.

Thoughts from an Expert on Acorns

I recently discussed acorns and bowhunting with Joe Hamilton, QDMA founder and senior advisor. Let’s review his words of wisdom.

“Where legal, hunters who bait with corn will notice a decline in activity at their bait sites once acorns begin falling,” Hamilton said. “Deer prefer acorns over most other food sources. Most of our native oak species drop acorns over a period of time, which is really good for bowhunting. And the greater the oak variety in your area, the greater the window of opportunity to hunt the timber will be. Acorns generally begin hitting the ground in mid-September and continue through the entire deer season in some cases.

“It’s been noted that deer prefer white-oak acorns over red-oak acorns,” Hamilton continued. “That’s because of their low tannin content, which makes them less acidic. So you may want to focus on stands of white oak – if available – over another oak subspecies.

According to research, deer prefer white-oak acorns over other subspecies. If many subspecies exist in your area, consider focusing on the white oaks.

“Regardless of what oak subspecies exist in your hunting area, the best way to find hot stand locations is to go into the woods with your binoculars and look up rather than down,” Hamilton shared. “This will help you see which trees are producing the most acorns in a given year.

“Anytime you have a bumper crop of acorns or any food source, it’s true that movement is constricted, especially with mature bucks,” Hamilton said. “Ample food and hunting pressure will nearly render mature bucks unavailable. You really have to hunt wisely when there’s food everywhere to avoid pressuring the deer.

“Now, hunters must consider that if acorns are still dropping during the whitetail breeding season, those are good places to hunt,” he said. “Does are certainly going to home in on those acorns, and the bucks will cruise through to scent-check them. Acorns attract does, and does attract bucks. There’s nothing profound about it. That’s how it’s always been.

“Whether or not a bumper acorn crop is positive or negative for bowhunters really depends on how you regulate your hunting pressure,” Hamilton noted. “A skimpy crop means deer must move more to find food, where a bumper crop often provides all the food they need without moving real far. Invade or hunt carelessly, and a bumper acorn crop becomes a negative thing.

“The thing to remember when acorns are abundant is that many good stand locations exist,” Hamilton advised. “If all the locations you’re considering hunting have mature bucks and acorns galore, no stand is better than another except with regard to wind direction. It’s probably good to keep trail cameras active to determine which bucks are using the area, but also to note what travel routes bucks are using to get to the acorns. I suggest setting up a stand to intercept the bucks on their way to the acorns in the afternoon, or on their way back to bed in the morning. Hunting right in the feeding area is simply too risky. Deer will often bust you as you access your stand in the mornings or leave it in the evenings if you hang right over the food source.”

The best way to determine which oak trees are producing the most acorns is to visit the woods with your binoculars before the acorns begin dropping.

There you have it. A bumper crop of food – acorns in this case – requires deer to move very little. But that doesn’t at all mean your season will be a bust. Hunt wisely, as Hamilton suggests, playing the wind and hunting areas with easy access and exit routes that won’t spook deer, and you could get an opportunity to arrow a mature buck. And if your stands don’t produce buck sightings early, the rut can change your luck in a heartbeat. Bank on it.

This site uses Akismet to reduce spam. Learn how your comment data is processed. 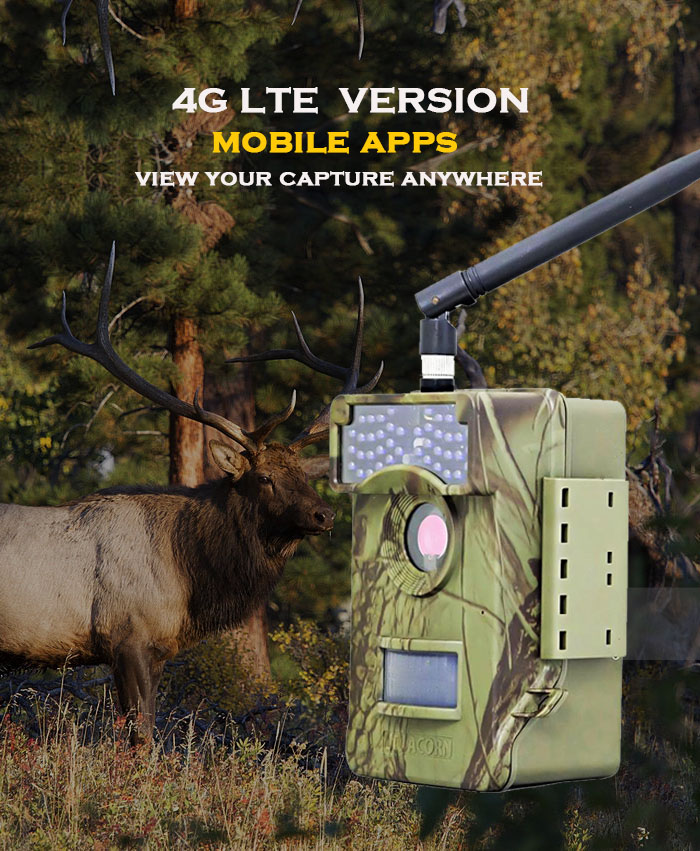 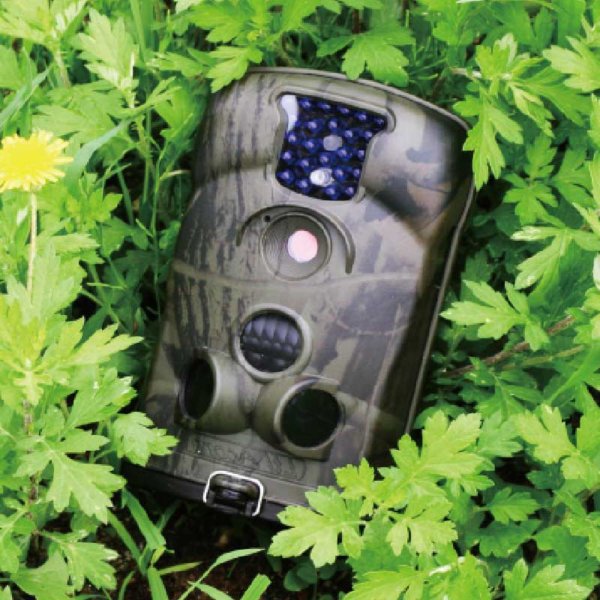 If damaged or not as described, Just return it within 30 days after delivery.

We provide 2years factory warranty for all of our products